History (as per framed document in School entrance hall) 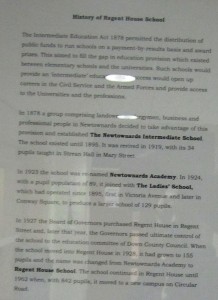 The Intermediate Education Act 1878 permitted the distribution of public funds to run schools on a payment-by-results basis and award prizes.  This aimed to fill the gap in education provision which existed between elementary schools and the universities.  Such schools would provide an ‘intermediate’ education and success would open up careers in the Civil Service and the Armed Forces and provide access to the Universities and the professions.

In 1878 a group comprising landowners, clergymen, business and professional people in Newtownards decided to take advantage of this provision and established The Newtownards Intermediate School.  The school existed until 1895.  It was revived in 1919, with its 34 pupils taught in Strean Hall in Mary Street.

In 1923 the school was re-named Newtownards Academy.  In 1924, with a pupil population of 89, it joined with The Ladies’ School, which had operated since 1895, first in Victoria Avenue and later in Conway Square, to produce a larger school of 129 pupils. 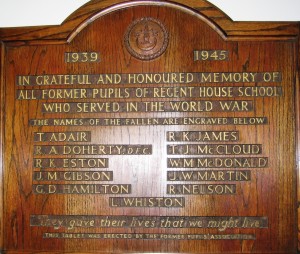 IN GRATEFUL AND HONOURED MEMORY OF

WHO SERVED IN THE WORLD WAR

THE NAMES OF THE FALLEN ARE ENGRAVED BELOW

THIS TABLET WAS ERECTED BY THE FORMER PUPILS’ ASSOCIATION

The tablet was unveiled on 31 January 1950 by Lieutenant Colonel Blair Mayne DSO and dedicated by the Revd Henry Savage – both former pupils.