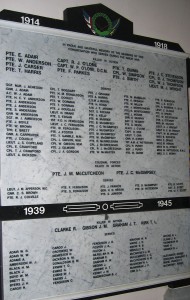 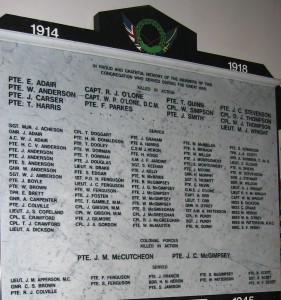 IN PROUD AND GRATEFUL MEMORY OF THE MEMBERS OF THIS

CONGREGATION WHO SERVED DURING THE GREAT WAR 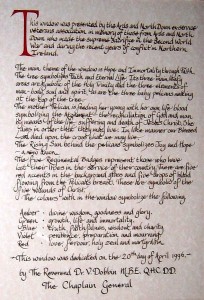 The main theme of the window is Hope and Immortality through Faith.  The tree symbolizes Faith and Eternal Life.  Its three main leafy areas are symbolic of the Holy Trinity and the three elements of man – body, soul and spirit, as are the three baby pelicans nesting at the top of the tree.

The mother pelican is feeding her young with her own life blood symbolizing the Atonement – the reconciliation of God and man by means of the life, suffering and death of Jesus Christ.  She dies in order that they may live.  In like manner our Blessed Lord died upon the cross that we may live.

The Rising Sun behind the pelicans symbolizes Joy and Hope – a new dawn.

The five Regimental Badges represent those who have lost their lives in the service of their country.  There are five red accents in the background glass and five drops of blood flowing from the pelican’s breast.  These are symbolic of the five wounds of Christ.

The colours within the window symbolize the following:

This window was dedicated on the 20th day of April 1996 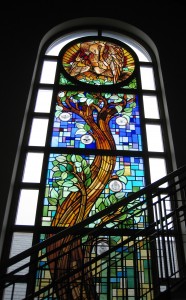 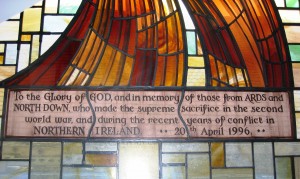 NORTH DOWN WHO MADE THE SUPREME SACRIFICE IN THE SECOND

WORLD WAR AND DURING THE RECENT YEARS OF CONFLICT IN